In 1882, Medicine Hat, District of Assiniboia, Northwest Territories began to be settled by workers who had begun construction on the wooden trestle bridge that would eventually cross the South Saskatchewan River to be used by the Canadian Pacific Railway.  Over the next few years, businesses and inhabitants grew and in 1884 with the discovery of natural gas, Medicine Hat became an unincorporated town. 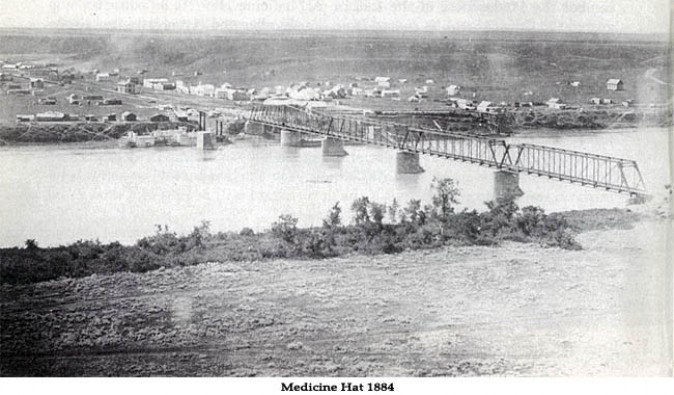 This growth began to tax the NWMP who with only five members were busy in the surrounding district and as such on January 13, 1899 Bylaw Number 8 was passed to create a position of Town Constable.  The bylaw was drawn up outlining the duties of a combined Inspector, Health Officer and Policeman.

By 1906, with a population of about 11,000 residents, Medicine Hat became a city and the police force had grown to a strength of 14 members.  As was the case in most Canadian cities at the time, the population growth in Medicine Hat was stagnant over the years of the First World War.  As the city’s growth renewed after the war years, so did the growth of its police force.

After sharing a car with the Fire Department, the Service bought its own vehicle in 1917 that was to be used during emergency cases, but they reserved bicycles to be used for patrolling at night.  During the depression of the 1930’s, members were kept busy dealing with the unemployed who were riding the trains back and forth across the country in search of employment.  Horses and motorcycle patrols were soon added to the transportation mode of the Service as a means of getting around a rapidly growing city.

With 38 members, in the 1940’s the Service outgrew the existing quarters in the basement of city hall and moved to a new building along 1st St. SE.  When Alberta’s oil boom took hold at the end of the 1970’s, the city grew substantially necessitating an increase in strength for the Service to nearly 70 members.

Since that point, Medicine Hat has continued to grow and thrive, drawing citizens from all parts of Canada and the world to enjoy the comforts and security this city provides.  With over a century of service to this community of over 60,000, the Service has occupied five different buildings, employed 377 members and has been under the direction of 22 chiefs of police.

Medicine Hat has had a proud history as a progressive community. Along with this, the police service has also grown into one of the most progressive and respected organizations within the Province and in western Canada.  With over 15 specialized policing areas, using leading edge technology, sound recruiting and training practices, the Service continues to attract excellent men and women who are dedicated to continuing to make Medicine Hat a safe community to live, work and raise a family.

The museum outlines the rich history of the Service from 1899 to the present time with interesting displays of equipment and uniforms used during this period to safeguard the citizens of Medicine Hat.

Even Cops are Human

Of Mice and Men

Crime on the Rise